Dhammadūta Sayadaw, Venerable Prof. Dr. Ashin Chekinda, is the founding chancellor of Dhammadūta Chekinda University(DCU) which was launched in June 2018 with an aim of promulgation of Theravāda Buddhism for the Buddhist scholars. He teaches Buddhism and Buddhist meditation in International Theravāda Buddhist Missionary University (ITBMU) run by the Government of Myanmar where he is also working as a Dean of Vipassanā Department, Patipatti Faculty,ITBMU,Yangon,Myanmar.

He obtained engineering degree (civil) from AGTI in 1979 and worked as senior supervisor in government projects over four years and received full-ordination as a Buddhist monk in 1983 under the instruction and guidance of the Late Ven. Dhammaduta Sayadaw Ashin Paňňājota who has nationwide reputation as great meditation master.

Since 1999, he had started founding Dhammadūta Buddhist Association and established some monasteries and Learning Centre. Currently his monasteries and centres are running for delivering Buddhist Ethics Courses and Meditation Courses while serving for monks and novices as learning centers. 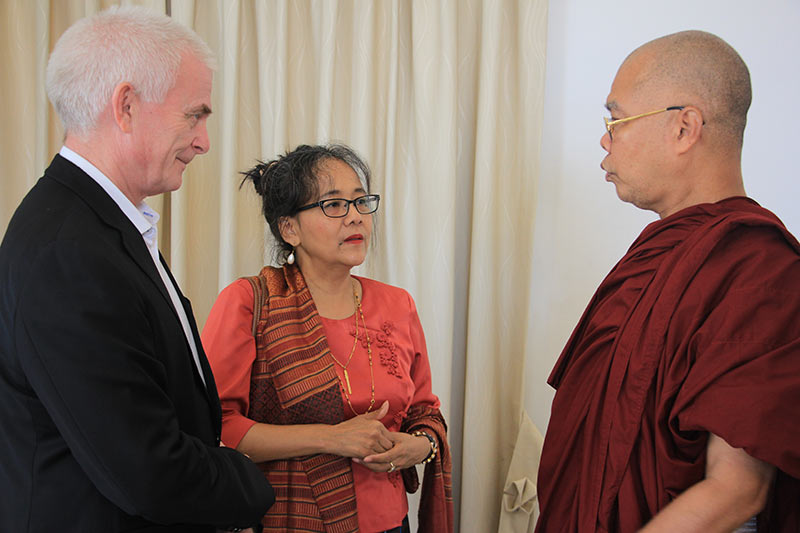 To serve monastic members and lay devotees alike, he set up

Dhammadūta Chekinda University (DCU) for local and international Buddhist scholars in 2018. Sayadaw is delivering apporoximately 700 public dhamma talk per year and leading as socially engaged Buddhist monks in several humanitarian works. In recognition of his excellent works, several honorary religious titles were conferred on him by the government:

He had written twenty-nine dhamma books in Burmese and three books in English, and delivered about ten thousands dhamma talks in local and abroad. While teaching meditation as a professor in ITBMU, he is occasionally conducting Youth Buddhist Ethics Courses and Meditation Courses.
In addition, Saydadaw is Leading the geriatric centre project which is aimed at to start in near future.
Because of his selfless humanitatrain works, he was awarded President’s . Excellency Award by President Thein Sein in 2013.
In 2017, Venerable Dr. Chekinda officially founded Dhammadūta Philanthropic Association to effectively contribute philanthrophic works in country, officially registered with the Ministry of Home Affairs.